What You Need To Know to Get This Story 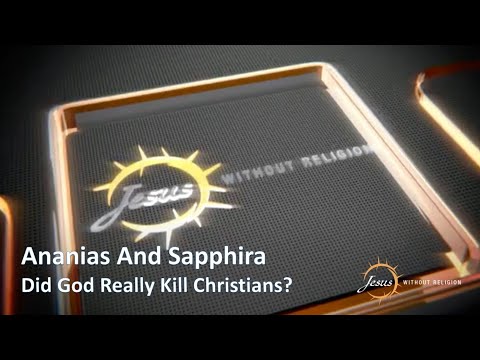 Ananias and Sapphira bible lesson for kids and adults:  The shocking truth is they were NOT believers!

Ananias and Sapphira Struck Dead For Lying – Believers or Not? This story from Acts 5 has scared Christians (and me) for many years. The million-dollar question is were they believers or not? If we believe that our sins have been forgiven and taken away then it would not make sense that they were believers and God killed them for sinning. There is no condemnation for those in Christ (Rom 8:1). He who believes is not judged (John 3:18). Today we will discuss and explain:

You know the story. Ananias and Sapphira lied to God and are killed on the spot. Let’s clear up this debate on their salvation status. I believe I have figured this one out, and scripture gives us a very clear answer. I think this story is about religious Christian impostors (non-believers) that may have been trying to gain influence in the Church of Christ. Further, they likely both rejected grace for law……

The story from the book of Acts 5 tells us they lied about the proceeds of how much money they got from their property and ends with them being struck dead on the spot! Wow, no grace there. Let’s take a close look at the scriptures to reveal to us about their faith. First, let’s take note of Acts 5:3 and see who had filled Ananias’ heart.

[Acts 5:3] But Peter said, “Ananias, why has Satan filled your heart to lie to the Holy Spirit and to keep back some of the price of the land?

It was Satan, not the Holy Spirit that filled his heart. Satan may fill a believer’s thoughts/minds but not our hearts. We have been given new hearts and they are filled with the Holy Spirit. Our heart of stone was removed and we were given a heart of flesh (Ezekiel 36:26).

[Acts 4:32] And the congregation of those who believed were of one heart and soul;

So first we see those who BELIEVED were of ONE HEART. We just finished reading that Ananias and Sapphire were not of the same heart in this story. Their hearts were filled with Satan. They did NOT believe!

and not one of them claimed that anything belonging to him was his own,

So ‘NOT ONE of them claimed’. This tells me Ananias and Sapphire we NOT ‘one of them’!

[Acts 4:32-33] but all things were common property to them. And with great power the apostles were giving testimony to the resurrection of the Lord Jesus, and abundant grace was upon them ALL.

They (the Christians) believed the Apostle’s message of Jesus’ resurrection and had abundant grace UPON Them ALL (The Believers). We did not see Grace with Ananias and Sapphira – we saw wrath and death (wages of sin is death).

[Acts 4:34-35]  For there was not a needy person among them, for all who were owners of land or houses would sell them and bring the proceeds of the sales and lay them at the apostles’ feet, and they would be distributed to each as any had need.

Important Note: This giving was just on the basis of love. We did not see ANY demand or commandment for God to do give up their property. It was their free will to do it or not.

And the story continues and ends in chapter 5 with the INSTANT death of Ananias and Sapphira. So we see their hearts were filled by Satan and they were not of “one heart” with the believers.  There is not a single verse that would conclusively tell us they were Christians – and with that said we can safely conclude that they were not believers, lied to God, and God destroyed them.

Finally, if God were to kill someone what would cause it? Sin. What did Jesus do about sin? He died for it. Did it work? You’re darn right it did, and anyone who has called on the name of the Lord and believe in His name shall be saved. That means your sins have been washed away as far as the east is from the west (Psalm 103:12). That means He remembers your sins no more (Hebrews 8:12).

To teach differently is to teach the Jesus died for our sins and our sins are forgiven…..unless we sin.