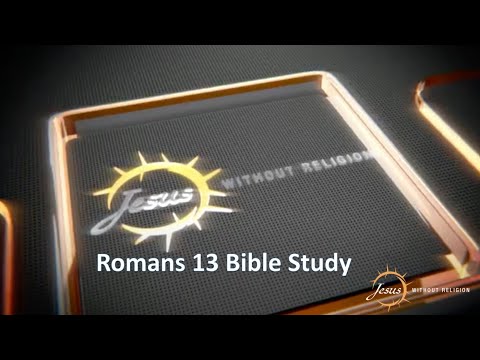 In the last 12 chapters, Paul has done a good job of laying the foundation. If you remember he started out talking about how all the planet earth is up a creek.

We’ve all got this problem of being born dead and Adam. He then moved forward with some good news about how we all have a solution. We discovered that solution is the same for every human.

Then we discover, in Romans 5, for those of us that accept that solution, that we have peace with God. In fact, Romans 5 also tells us that we have escaped the wrath of God.

That’s going to be important because we’re going to see that word right here in chapter 13. Paul’s going to start off talking about taxes in politics and being obedient to Government. Let’s get started

Every person is to be subject to the governing authorities. For there is no authority except from God, and those which exist are established by God.

Keep in mind this letter is being written to Romans. So if you think Christians have it bad in America, we don’t have anything on the Romans.

Christians were being treated very badly, some even tortured. And Paul opens up by telling them to be in subjection to the government.

I think we’re going to find out that Paul has a heart for the Roman Christians and he’s giving them good counsel to keep them from being targeted or attacked by the government.

We’re discovering that no one is in authority that God has not allowed to be in authority. And that doesn’t mean evil rulers are the hand of God against us. That just means God is in control and he has permitted them to be in this position of authority. And Paul wants to make sure Christians don’t bring amongst himself unnecessary trouble.

2 Therefore whoever resists authority has opposed the ordinance of God; and they who have opposed will receive condemnation upon themselves.

Now, I want you to be very careful about how you interpret the word condemnation. Remember Romans 8:1 said there is no condemnation for those in Christ.

What we’re going to discover is that this combination is not coming from God. This is condemnation that’s coming from the governing authorities. And Paul’s heart is to help us avoid that.

3 For rulers are not a cause of fear for good behavior, but for evil. Do you want to have no fear of authority? Do what is good and you will have praise from the same;

The evil in context here is us, as Christians, disobeying our government and breaking the law. In other words, if we’re not going to obey authority and we’re going to break the laws of the land or rebel against authority then we are behaving like evil people.

And here we discover the way to avoid fear over the rulers is to be obedient. For example, if you don’t pay your taxes you might end up in jail. But you see who the condemnation is coming from? This is condemnation from rulers.

I said earlier we would see that word wrath. I just want to make sure that we’re clear as to who this wrath is coming from in context. This condemnation and wrath are coming from humans. From governing authorities and rulers over us.

So what do we do to keep their wrath away from us? We see that in the next verse.

5 Therefore it is necessary to be in subjection, not only because of wrath, but also for the sake of conscience.

So what we see is that when we obey the ruling authorities, not only do we avoid wrath, but our conscience is clear. Meaning we are at peace and not stressed out over our wrongdoing or that we might be in trouble soon.

Of course, I am not implying that we should be doormats and commit acts of evil if the government tells us to. That’s not the context here.

6 For because of this you also pay taxes, for rulers are servants of God, devoting themselves to this very thing.

7 Pay to all what is due them: tax to whom tax is due; custom to whom custom; respect to whom respect; honor to whom honor.

So no question, we are free in Christ. You can avoid not paying your taxes and still be saved, but you’re going to have some wrath from the ruling authorities if you do. As Paul says, ‘all things are permissible. But Paul also says ‘all things are not profitable. Meaning, be careful how we exercise our freedom in Christ because there are earthly consequences when we make stupid decisions.

8 Owe nothing to anyone except to love one another; for the one who loves his neighbor has fulfilled the Law.

Love. Under the old covenant, the greatest law of them all was to love your neighbor. And under the new covenant, Jesus gives just two commands. The first one is to believe and the second one is to love others as he has loved us.

The same thing applies to stealing, coveting, or murder.

10 Love does no wrong to a neighbor; therefore love is the fulfillment of the Law.

Remember, we have died to the law. Romans also tells us that ‘apart from the law sin is dead’.

So, what we’re actually learning here is that Christ produces love. And that when we let the love of Christ live through us – we will not stumble. Love does not murder. Love does not want someone else’s spouse. So again, this is not about you being under the law. This is about you expressing love and in doing so avoiding evil acts.

11 Do this, knowing the time, that it is already the hour for you to awaken from sleep; for now salvation is nearer to us than when we first believed.

12 The night is almost gone, and the day is near. Therefore let’s rid ourselves of the deeds of darkness and put on the armor of light.

In other words, live out your identity in Christ.  Love others and you will avoid the deeds of the evil one. Simply said – put on Jesus. The armor of light.

13 Let’s behave properly as in the day, not in carousing and drunkenness, not in sexual promiscuity and debauchery, not in strife and jealousy.

Now, whether we’re on the side of grace or a legalist, we can all agree that drunkenness and sexual promiscuity are all bad things. But why would Paul be writing this to a Christian?

We have people out there teaching that Christians don’t sin if we are saved and that we live perfect lives. But the truth is there would be no purpose for behavior verses like this in the Bible if we weren’t capable of screwing up. The fact is sometimes Christians commit adultery. Sometimes we have strife and jealousy.

So make no mistake, there is a place in Christianity for behavior lessons. But I want to be clear, that message is about living out who you really are, and it should not be the core of our preaching. Jesus is the foundation of our message.

We need to spend a lot more time teaching people who they are in Christ, and from there it makes sense to let what’s already happened on the inside to flow through us on the outside.

14 But put on the Lord Jesus Christ, and make no provision for the flesh in regard to its lusts.

Earlier in Romans we saw Paul talking about struggling with sin, and he went on to say that he now recognizes it’s no longer he that does it, but sin that did it. He wasn’t denying that he was in control, but rather he was acknowledging that there is an evil exterior force that is always at work trying to deceive us to stumble.

So in this verse, we are being told not to make a provision for it it’s lust. So to be clear this is not your lust, even though it’s coming from a thought that you are experiencing.

The problem is the flesh. That’s why you will get a new body in heaven but you will not get a new spirit or a new soul. You will still be you.

So the way we avoid the desires of the flesh is by putting on Jesus. That’s why we don’t need the law to guide us. Love never leads us to desire evil acts.