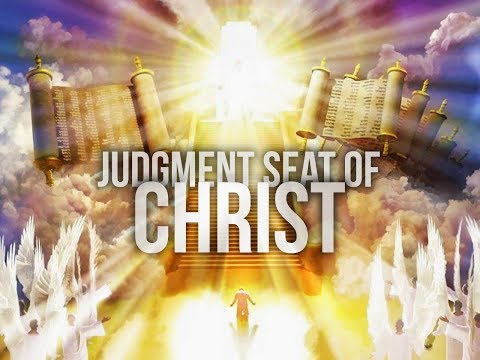 Judgment & Rewards – Are believers judged? Do Christian get rewards?

Today we are going to be talking about this idea that Christians are getting judged and some others are getting a bunch of rewards in heaven for all of their works. This doctrine puts us right back on the treadmill of we’ve got to do more so God will like us more and really hook us up when we get to heaven. What it really does is it takes our focus off of Jesus and puts it back on ourselves and has us pounding our chest like “look at what I’m doing for God, aren’t I awesome”. We begin to think God is impressed with us, when really He’s impressed with His son.

For a bit of clarity first, I’m not saying Christians should not have works for God. We should, because as Ephesians 2:10 tells us. We were made for good works which God Himself prepared BEFOREHAND so that we would walk in them.

We don’t have to go around trying hard to find works. God prepared them and you’ll walk right into them and you’ll know it’s from God. But that work won’t feel like an effort because it will come out in the form of love. You won’t have to “get out of your comfort zone” as some would say because you’ll desire to do this. It’s who you are, with a new heart and new desires from God. So you won’t have to get out your legal pad and check off a work that you did on your own accord.

First, let’s look at the verses that are being sold to us to sell this idea that believers are getting judged based on what we do.

[Romans 14:9-12] 9 For this very reason, Christ died and returned to life so that he might be the Lord of both the dead and the living.  10 You, then, why do you judge your brother? Or why do you look down on your brother? For we will all stand before God’s judgment seat.  11 It is written: ”‘As surely as I live,’ says the Lord, ‘every knee will bow before me; every tongue will confess to God.’”  12 So then, each of us will give an account of himself to God.

What we’re going to see soon is yes, everyone will stand before the judgment and will be judged for what they have done, good or bad. But, the Christian will be judged for what he believed, not what he did. The believer will literally just enter heaven and there will be no discussion about how great their works were and what God owes them in rewards.

[2 Corinthians 5:10] For we must all appear before the judgment seat of Christ, so that each one may be recompensed (paid back) for his deeds in the body, according to what he has done, whether good or bad.

Now, let’s be honest here. Even believers have done some bad things. If we’re going to be paid back then we might have a big problem on our hands if it’s about us and our works or law-keeping. But as you’ll soon see, it’s not about you, it’s about Jesus. Let’s also peak at a couple of reassuring verses.

[John 3:18] He who believes in Him IS NOT JUDGED; he who does not believe has been judged already because he has not believed in the name of the only begotten Son of God.

So according to this, you won’t be judged. So we have to figure out are we judged or not? Are we just judged for good works? Bad ones? What’s the deal?

[Hebrews 10:17] “And their sins and their lawless deeds I will remember no more.”

So we’ve got to use scripture to determine which is right and which is misunderstood.

In Matthew 25 we get a picture of judgment day and you’ll see there’s no punishment being doled out according to each individual’s performance.

Are Christians Judged? Matthew 25:31-46 – A picture of Judgment Day according to Jesus Himself

[Matthew 25:31-46] 31 “But when the Son of Man comes in His glory, and all the angels with Him, then He will sit on His glorious throne. 32 All the nations will be gathered before Him; and He will separate them from one another, as the shepherd separates the sheep from the goats; 33 and He will put the sheep on His right, and the goats on the left.

Who are the Sheep? They are the believers. What Side are they on? The right side.

Who are the Goats? They are the unbelievers on the left side.

[Matthew 25:34] 34 “Then the King will say to those on His right, ‘Come, you who are blessed of My Father, inherit the kingdom prepared for you from the foundation of the world.

Did notice there was no Account for Anything. Just enter. Where’s the Judgment? Did Jesus Forget? Or is all God looking at is faith in His son.

Now the legalist gets out their legal pad to start making sure they do all of this. But this is not to an individual, but rather to the whole church.

They don’t even know they did any of this stuff. They are kind of saying “what are you talking about, we never did this stuff”. And let’s see how God responds.

[Matthew 25:40] 40 The King will answer and say to them, ‘Truly I say to you, to the extent that you did it to one of these brothers of Mine, even the least of them, you did it to Me.’

How many did he say? ONE. These are acts of love (and just examples) that Christ worked through them. It was not about how many. It’s about only LOVE that comes from Christ in us. It’s not about QUANTITY, but QUALITY. Only SHEEP can do this (through Christ).

[Matthew 25:41-42] 41 “Then He will also say to those on His left, ‘Depart from Me, accursed ones, into the eternal fire which has been prepared for the devil and his angels; 42 for I was hungry, and you gave Me nothing to eat;

Look closely at this grading system. Jesus said NOTHING. Surely they did some good things but it doesn’t count unless it comes from Christ, in you. Works are either of Christ or of the flesh. The group on the right felt like they didn’t do a thing, and we’ll soon see this group thinks they did.

They think they did these things.

Note he just said ONE. Now either Jesus means we get saved by good deeds and not faith, or these guys did some of this stuff but it was of the flesh and meant nothing. That it’s impossible to please God without faith. That work God is really looking at is rather you believe, or not.

Remember what Jesus said to the Pharisees that asked Him what kind of works pleased God?

So it appears God is not impressed with what we “do” but rather what we “believe”.

Do Christians Get Rewards Based on Performance?

Now let’s talk about this idea of getting our rewards. The word rewards (plural) is never used in the bible. It’s just reward. Singular. It’s Jesus.

I think we get a great picture of what the reward looks like individually in the parable of the vineyard workers. The parable is describing heaven.

[Matthew 20:1-4] “For the kingdom of heaven is like a landowner who went out early in the morning to hire laborers for his vineyard. 2 When he had agreed with the laborers for a denarius for the day, he sent them into his vineyard. 3 And he went out about the third hour and saw others standing idle in the market place; 4 and to those he said, ‘You also go into the vineyard, and whatever is right I will give you.’

Note, he said, “whatever is RIGHT, I will give you”. On earth we think in terms of you get what you deserve. In God’s eyes believers don’t get what we deserve, but instead, we get a free gift, and it’s the same for all of us. We get life in Christ.

[Matthew 20:5-7] And so they went. 5 Again he went out about the sixth and the ninth hour, and did the same thing. 6 And about the eleventh hour he went out and found others standing around; and he *said to them, ‘Why have you been standing here idle all day long?’ 7 They *said to him, ‘Because no one hired us.’ He *said to them, ‘You go into the vineyard too.’

Now in the end we’ll see some mad people kind of saying “this is NOT FAIR, we worked longer and harder and they get the SAME thing”?

[Matthew 20:8]  “When evening came, the owner of the vineyard *said to his foreman, ‘Call the laborers and pay them their wages, beginning with the last group to the first.’

Now if the first group sees how much the last group got paid, what do you think the guys at the end of the line are thinking? They are thinking they are really going to get hooked up. No way could they all get the same thing. They are looking at their works, and not the kindness of the boss who can do what he wants with his money.

[Matthew 20:9-12] 9 When those hired about the eleventh hour came, each one received a denarius. 10 When those hired first came, they thought that they would receive more;  but each of them also received a denarius. 11 When they received it, they grumbled at the landowner, 12 saying, ‘These last men have worked “only” one hour, and you have made them “equal” to us who have borne the burden and the scorching heat of the day.’

Does this sound like the people we know that believe in rewards in heaven based on how much they worked? They think they deserve more in heaven because they’re so awesome compared to you. They are looking at their own works, not Christ alone.

They have a problem with God’s grace and kindness towards ALL PEOPLE and think they deserve more because they EARNED it. This is not about God mistreating people that worked harder, it’s about God treating all of us equal, because God is measuring Jesus, not human performance.

The takeaway? It’s all about Jesus. On judgment day God will look at Jesus, not you. If you’re a believer God won’t look at your level works, but rather the work that Jesus did through you. Your reward will be the same as everyone else’s. It will be Jesus. Eternal life with God.

Jesus is our reward, and everything else pales in comparison. Amen.