Can a Christian Lose Salvation 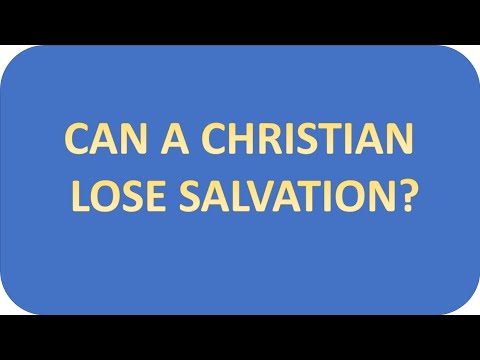 Can A Christian Lose Salvation?

Think about the guy teaching this doctrine. Where’s the anchor of hope? Is it in His performance, the Christs?

If you could lose salvation, what would cause it?

2-Walking Away. Drifting Away.

First, let me point this out:

Your salvation is called ‘ETERNAL’ salvation. Let’s talk about why the word ‘eternal’ is so important.

Eternal means without an end.

If your salvation is ‘without’ and end, then God would be a liar if you could lose it. God is NOT a liar.

Can Sinning Cause Me to Lose Salvation?

If there is one thing that pains me, it’s the legalist gospel message that teaches believers that they can lose their salvation.

Jesus said my yoke is easy and my burden is light, and I can tell you there is nothing easy or light about fearing moment by moment that God might strip you of your salvation. We are saved by faith, not by works, not words, not law.

If you could lose your salvation what would you have to do to lose it? What could cause it? Sin would cause it. And what did Jesus do about your sin? He died for them. He forgave them. He washed them. How little confidence is there in Christ when we think our sin is bigger than the cleansing power of His blood?

The reality is nothing can take your salvation.

[Rom 8:38-39] For I am convinced that neither death, nor life, nor angels, nor principalities, nor things present, nor things to come, nor powers, nor height, nor depth, nor any other created thing, will be able to separate us from the love of God, which is in Christ Jesus our Lord.

If you think you can lose your salvation, and you’re doing something to keep it, that’s called justification by works, and it’s not the gospel. It’s a lie. You are saved by faith alone.

Hebrews 7:25 tells us “Therefore He is able also to save FOREVER those who draw near to God through Him, since He ALWAYS lives to make intercession for them”.

So God can save us completely because He lives forever, not because you sin less.

We have been sealed to the day of redemption and our salvation is unshakable.

Consider this too – God calls us to forgive others as He forgave us. Well, what if God only forgave us to a certain point? You see God has completely forgiven every sin the believer has or will ever-commit and He wants us to do the same, to the best ability that we can. Jesus said in Matthew 18:22 to forgive 70 x 7. In other words, keep forgiving. He tells us to do that because that’s the measure of forgiveness He has given to us.

Be careful not to let the legalist take your confidence in the blood of Christ because they’ll be quick to call total forgiveness a hyper-grace message. We do not condone a life of sin, but rather we encourage believers to avoid it. Sin stinks, and it never fulfills. Nonetheless 1 John 2:1tells us this,

“I am writing these things to you so that you may not sin. And if anyone sins, we have an Advocate with the Father, Jesus Christ the righteous;”

That’s right, God Himself is our advocate. He defends you. He calls you innocent. And keeps doing it for you as long as He needs to.

Romans 5:20 tells us “where sin increased, grace abounded all the more”. So how in the world do we get a doctrine of one too many sins and Gods forgiveness is null and void. It’s not the gospel.

Some people are quick to pull out a verse from Hebrews, such as Hebrews 10:26 which says

“For if we go on sinning willfully after receiving the knowledge of the truth, there no longer remains a sacrifice for sins” , and the problem is they don’t understand who the audience is.

This willful sin is referring to the sin of unbelief. In fact, the first 10 chapters of Hebrews never mention any kind of sin except the sin of unbelief. No mention of lying, adultery, murder, or any other commandments. That’s because this book is written to Jewish people who are were all about the law for their righteousness, and now they have heard the gospel (received the knowledge of Christ as Savior), but have rejected Jesus as the life, the truth, and the only way to the father, and instead have returned to law as their way of obtaining righteousness. Jesus was the only acceptable sacrifice for sin and therefore if you willfully chose not to believe and refuse Christ there no longer remains a sacrifice for sin. This is not losing salvation. This is about never having it in the first place.

DOES WALKING AWAY FROM GOD CAUSE ME TO LOSE SALVATION?

The problem is, you won’t find that teaching in anywhere the scriptures. I’m not saying some people don’t fall into the trap of sin, and perhaps avoid God, prayers, or anything to do with Him. But that’s not the same as losing salvation. That’s being taught as, once believers, now rejecting Jesus. It’s not. It’s once believers, now foolishly buying the lies of the evil one that sin will fulfill us.

So, where do they get this from? Usually, they take parables and twist them so bad that they end of with this horrific teaching. They use parables because it’s simply not ever found outside of them.

There are verses in Hebrews that people misunderstand. But remember, Hebrews is written to unbelieving Jews, who are rejecting the gospel of Christ and sliding back to law-based salvation. Let’s look at these 3 verses:

[Hebrews 2:1-3] For this reason we must pay much closer attention to what we have heard, so that we do not drift away from it. 2 For if the word spoken through angels proved unalterable, and every transgression and disobedience received a just penalty, 3 how will we escape if we neglect so great a salvation?

What did they hear that they needed to pay closer attention to and not drift away from? It was Christ crucified. Saved by faith. It was Jesus is the only acceptable sacrifice for sin.

What was the word spoken by angels that was unalterable and if you fell short you got the just penalty (death)? It was mosaic law.

So what’s the warning in verse 3? He’s telling the Jews, if the Mosaic law, a man’s covenant, was punished with no exception, how much more trouble are you in if you reject the Son of God? The one who died for our sins. And instead of receiving Jesus, they symbolically spit in His face and drift back to the law. A law in which no one was found righteous. A law that was called a ministry of condemnation and death. A law that says if you keep it all, and only stumble at one point, you are guilty of it all.

Take away: While we may stupidly have a long season of sin, and ignore God, He swears to never leave us or forsake us. He swore when we are faithless, he would remain faithful.

So, while we might try and walk away from God, He won’t let us. If you’re going to live a life of sin, you’re going to have to do it with Christ living in you. Because he’s not giving up on you, and He’s not leaving you no matter how bad you get. Yep, you can sell your bible, stay out of the church, drink a bunch of beer, and tell a bunch of lies, and even still –  God will be right there working overtime to get you back on the right path.

You are safe. You will never lose your salvation. Jesus is your anchor.

I leave you with these verses.

Ephesians 2:8-9 “For by grace are you have been saved through faith; and that not of yourselves: it is the gift of God.

You are safe. You are Secure. Jesus is your rock!