Can a Gay, Lying, Drunken, Adulterer Get into Heaven?

HomeBibleCan a Gay, Lying, Drunken, Adulterer Get into... 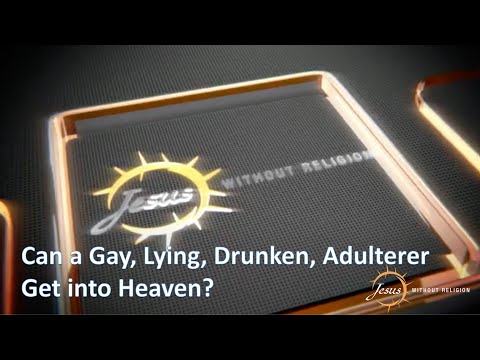 Can a Gay, Lying, Drunken, Adulterer Get into Heaven?

I know, I am about to really upset some religious egos. But I am far more interested in sharing the truth than pleasing the legalists.

Before I start, let me give a full disclosure. We do NOT condone sin of ANY type. So we are not giving approval of homosexual relations, drunkenness, or adultery. We are not light on sin, but rather we are heavy on the blood of Jesus being much greater than the sin of man.

Let’s look at salvation verses. Let me know if you hear a single mention of ‘avoiding sin’ as a means of getting saved.

[John 3:16] For God so loved the world, that He gave His only Son, so that everyone who believes in Him will not perish, but have eternal life.

[John 3:36] The one who believes in the Son has eternal life;

[John 5:24] “Truly, truly, I say to you, the one who hears My word, and believes Him who sent Me, has eternal life, and does not come into judgment, but has passed out of death into life.

[John 6:40] For this is the will of My Father, that everyone who sees the Son and believes in Him will have eternal life, and I Myself will raise him up on the last day.”

[Ephesians1:13] In Him, you also, after listening to the message of truth, the gospel of your salvation—having also believed, you were sealed in Him with the Holy Spirit of the promise

[Romans 1:16] For I am not ashamed of the gospel, for it is the power of God for salvation to everyone who believes, to the Jew first and also to the Greek.

Where’s the word ‘except’? Isn’t it every who believes, except for those who sin? So, at salvation, some say, all your sins are forgiven, but if you don’t fully stop God changes His mind? So, the gospel get WORSE after salvation? I don’t think so!

[Ephesians 2:8-9] For by grace you have been saved through faith; and this is not of yourselves, it is the gift of God; 9 not a result of works, so that no one may boast. Yes, we do see the language ‘repent and believe’, and I’ll address that now. But first, you don’t get to ignore all of the verses I just read that made no reference to repenting from outward sin.

What does repent mean? It means a change of mind. To turn in another direction.

Yes, we SHOULD all repent from outward sin. Sin is awful. It will never fulfill us.

In the gospels, who was being told to ‘repent and believe’?

[Matthew 23:27]  “Woe to you, scribes and Pharisees, hypocrites! For you are like whitewashed tombs which on the outside appear beautiful, but inside they are full of dead men’s bones and all uncleanness.

[Luke 11:39] “Now you Pharisees clean the outside of the cup and of the dish; but your inside is full of greed and wickedness.

So, they look all good and perfect in their behavior. So, what’s the problem?

The problem is they are rejecting Jesus and chasing after the law for salvation. Outward human performance. The problem was on the INSIDE, not the OUTSIDE.

We are saved by faith ALONE.

So, the Jews do need to repent.

They need to repent INWARDLY and believe that no one comes through the Father except through Jesus. That means they can’t inherit the Kingdom by repenting from sin. There is no mention of that anywhere. Are we called to avoid outward sin? YES. But does that save us or keep us saved? Absolutely Not.

Is there any scripture where we see people engaged in horrific, continual sin? We sure do

Read 1 Corinthians. They are heavily involved in:

As you read that letter, we understandably will see them called out for the disgusting choices and ungodly behavior. But you won’t find a single mention of their salvation being threatened. As the Apostle Paul writes them to chastise them, he’s very careful not to water down their forgiveness and eternal salvation. Just flip to 1 Corinthians chapter 1 and here’s what you will read about how Paul describes them:

>They have been sanctified – verse 2

>They are saints – also in verse 2

>God’s grace has been given to them – verse 4

>They are enriched in Him – verse 5

>The testimony of Christ is confirmed in them – verse 6

>They lack no spiritual gifts – verse 7

>In the end they will be confirmed as blameless – verse 8

> They were called into fellowship with Jesus – verse 9

Man, I’d bet the religious elites were ticked off when Paul said all these things. Kind of like a few comments and out-of-context scripture I will get here from the arrogant religious and self-righteous. So, can a Gay, Lying, Drunken, Adulterer Get into Heaven? It depends. Have they believed in the Son? Do they know and trust Jesus alone as their Savior? Are they Christians? If the answer yes, then they are eternally saved, and making bad choices won’t change that.

Galatians 2:21 read ‘I do not nullify the grace of God, for if righteousness comes through the Law, then Christ died needlessly.”

So, if we could be saved by avoiding sin, which obviously includes homosexuality, adultery, and every other outward sin, then Jesus would have never gone to the cross.

Under the law, you were crushed by the wrath of God for sin. Adultery was a death penalty. And Jesus said that even looking with lust was the equivalent of adultery. That alone should shut the mouth of all these legalists who won’t stop pointing the finger at gay people. They are literally like the Pharisee who pounds his chest bragging about how they are just glad they are not like the tax collector. I’m saying, there may be a lot of homosexuals, adulteresses, and drunkards that will see the Kingdom, while a lot of those egotistical self-righteous legalists will not. You either fully trust Jesus for salvation, apart from any human effort, or you don’t trust him at all

Remember the law is an all-or-nothing deal.

[Galatians 3:10] For all who are of works of the Law are under a curse; for it is written: “Cursed is everyone who does not abide by all the things written in the book of the Law, to do them.”

[James 2:10] For whoever keeps the whole Law, yet stumbles in one point, has become guilty of all.

But Christians have these promises:

[Galatians 3:13] Christ redeemed us from the curse of the Law, having become a curse for us

[James 2:10] For whoever keeps the whole Law, yet stumbles in one point, has become guilty of all.

[Galatians 3:24-25] Therefore the Law has become our guardian to lead us to Christ, so that we may be justified by faith. But now that faith has come, we are no longer under a guardian.

[Hebrews 8:13] When He said, “A new covenant,” He has made the first obsolete. But whatever is becoming obsolete and growing old is about to disappear.

So, Paul is clear on two things, and so am I.

1-Paul is free to make stupid choices. He is free from the law and everything is permissible. So nothing he does will cost him his salvation. The blood worked and Paul is not under the curse of the law.

2-Paul will not exercise that freedom to make bad choices, and nor should any of us. Before we were saved, those sins would have let to death. Homosexuals, drunks, sexually immoral….none of them would have inherited the kingdom (1 Cor 6:9-10). Now, if you’re the legalist, you stop at verse 10. If you’re the Apostle Paul, even when chastising people doing those things, he is going to give you confidence about your salvation, even if you are guilty of those bad choices.

And we see Paul’s closing thoughts just one verse later.

Take Away: Yes, a Gay, Lying, Drunken, Adulterer CAN get into Heaven if he/she is a child of God. But, if you’re going to live a lifestyle of ungodliness, then I can tell you this:

1-You’re going to have to do it with Jesus in you.

Jesus said He will never leave you or forsake you. He said when you are faithless He will remain faithful.

2-You will eventually discover that the lie sounds like it will fill you with joy. But it never will. It may feel good for a moment, but in the end sin will always leave you empty.

Lastly, I did not create this post to debate legalists. I created it because I want everyone, including those listed in the title of this article, to know who they are in Jesus. Theirs is no greater reason to say no to sin that recognizing that God made you clean. He has fully paid for every sin you have or will commit. He gave you a new heart with new desires. You are a new creation. He loves you. You can never out sin the grace of God. And while you are free to make bad choices, you will never be filled to the fullest unless you are living out your real identity in Christ.

So, if you are a believer, the real question isn’t Can a Gay, Lying, Drunken, Adulterer Get into Heaven? The real question is what do you want to do with that freedom? It’s your choice. You can choose like the Corinthians did, and live empty meaningless lives, or you can let what’s on the inside be reflected on the outside. It’s the only you will ever experience real joy of fulfillment.