Tithing in the New Testament – Are Christians Required to Tithe? 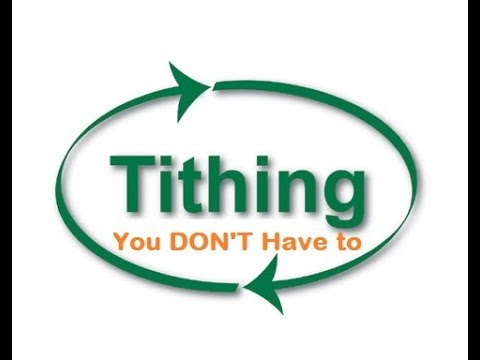 Tithing – Are Christians Really Required To Do it Under The New Covenant, Apart From Law? Are we under a curse if we don’t tithe? Is it not a law, but a commandment? What’s the deal?

Regardless of all the religious teachings which come from some great pastors, 10% doesn’t please God any more than 2% or 50%. Today We Discuss:

From Romans to Revelation, there is NOT A SINGLE PASSAGE that instructs Christians to give a required tithe or 10%. In fact, we find the opposite—under God’s new way, there’s no minimum and no maximum. It’s entirely up to us, and we read in 2 Corinthians 9:7  ‘Each man should give what he had decided in his heart to give, not reluctantly or under compulsion, for God loves a cheerful giver.’ Are we teaching a “don’t give” message? Absolutely not, and in fact, giving is something the believer naturally feels motivated to do. But why give? There are several good reasons for giving that are discussed in the New Testament. First, we’re told to give when there’s a need (2 Cor. 8:12). Next, we’re asked to share with others when we have an abundance (2 Cor. 8:13-15). And finally, we see the early church giving because they were excited about the message and wanted to see a spiritual ‘harvest’ from their giving (2 Cor. 9:7-10). You’ve got to admit that it’s wonderful to participate alongside the God of the universe, collaborating in the work that He is doing to save the lost. Now there are your reasons to give!”

If you see tithing as a matter of law then consider that we’re not under the law, but rather we are under grace, and in Matthew 23:23 Jesus seems to suggest that tithing is a law, and Jesus goes as far as to tell the scribes and Pharisees that justice and mercy and faithfulness are way more important. In other words, love is where it’s at.

[Matthew 23:23] “Woe to you, scribes and Pharisees, hypocrites! For you tithe mint and dill and cummin, and have neglected the weightier provisions of the law: justice and mercy and faithfulness; but these are the things you should have done without neglecting the others.

Nearly the entire teaching about tithing as a requirement comes from a story about a man named Melchizedek who is “like Christ” if not Christ Himself, and this man mysteriously appears for just a moment in the bible, and Abraham gives him a 10th of all His spoils of war. Now, let’s unravel this story and get free from all the bondage of your better tithe, or else messages. First, let’s review Genesis 14.

[Genesis 14:17-24] 17 Then after his return from the defeat of Chedorlaomer and the kings who were with him, the king of Sodom went out to meet him at the valley of Shaveh (that is, the King’s Valley). 18 And Melchizedek king of Salem brought out bread and wine; now he was a priest of God Most High. 19 He blessed him and said,

He gave him a tenth of all. 21 The king of Sodom said to Abram, “Give the people to me and take the goods for yourself.” 22 Abram said to the king of Sodom, “I have sworn to the Lord God Most High,  possessor of heaven and earth, 23 that I will not take a thread or a sandal thong or anything that is yours, for fear you would say, ‘I have made Abram rich.’ 24 I will take nothing except what the young men have eaten, and the share of the men who went with me, Aner, Eshcol, and Mamre; let them take their share.”

That’s the story. That’s where we get this whole you have to tithe message.

As we look at Hebrews 7 we begin to get a good understanding of Melchizedek and why he appears in the bible, but if we first let’s take notice of a few important facts from what we just read in Genesis 14.

1) There was never a “command” to tithe this money

2) Abraham only did this once. This was not some ongoing giving.

3) He did not tithe all that he owned. The giving was only what he got from war and taking from other people. I’m not saying that was a bad thing in any way.

Now as we read Hebrews 7 you will discover this is all about Abraham respecting a FOREIGN priest and showing us how Jesus is greater than the law. I want you to see that this is not about a required giving of 10% at the local church. If you want to give that much, then that’s great, but don’t do it because you’re afraid God will hurl wrath at you if you don’t or that you getting an extra blessing as if God were a slot machine. Put your money in, and out poor the blessings.

It should also be understood that giving a 10th of Spoils to a king was a common middle east tradition.

Now, to fully understand this short story in Genesis, all we need to do is look at Hebrews 7, and we’ll see what this is really all about. We should learn that this is about looking to a new priest that even Abraham respected.

[Hebrews 7:1-2] 1 For this Melchizedek, king of Salem, priest of the Most High God, who met Abraham as he was returning from the slaughter of the kings and blessed him,2 to whom also Abraham apportioned a tenth part of all the spoils, was first of all, by the translation of his name, king of righteousness, and then also king of Salem, which is king of peace.

[Hebrews 7:3] 3 Without father, without mother, without genealogy, having neither beginning of days nor end of life, but made like the Son of God, he remains a priest perpetually.

Imagine a Jewish person reading old Testament scripture about Abraham respecting Melchizedek in Genesis. That’s  a big deal to them.

[Hebrews 7:4] 4 Now observe how great this man was to whom Abraham, the patriarch, gave a tenth of the choicest spoils.

The emphasis is how great Melchizedek was. But what makes him great? It’s that he was either the type of Christ, maybe even Christ Himself.

[Hebrews 7:5] 5 And those indeed of the sons of Levi who receive the priest’s office have commandment in the Law to collect a tenth from the people, that is, from their brethren, although these are descended from Abraham.

The only ones to normally collect tithes in ALL of the Jewish law were the Levites (sons of Levi). So the question has to be asked by the Jews “Why is the heck is Melchizedek getting a tithe? He’s not a Levite. He’s genealogy makes that clear. But as you’ll see the point is this is not about tithing, it’s about a new priest, and when a new priest comes the law changes.

[Hebrews 7:6-7] 6 But the one whose genealogy is not traced from them collected a tenth from Abraham and blessed the one who had the promises. 7 But without any dispute the lesser is blessed by the greater.

What’s the point…who was blessed? The Lesser! Abraham is the LESSER. Melchizedek is the GREATER. Perhaps a small glimpse of Law verses Grace.

[Hebrews 7:8-10] 8 In this case mortal men receive tithes, but in that case one receives them, of whom it is witnessed that he lives on. 9 And, so to speak, through Abraham even Levi, who received tithes, paid tithes, 10 for he was still in the loins of his father when Melchizedek met him.

So Levi was still in Abrahams’s loins. I think we all know what that means. Levi will be Abrahams’s descendant. Levi is in Abrahams’s loins so even though Levi will eventually receive the tithes, for now, he is giving a tithe to Melchizedek, in a manner of speaking. And remember, Melchizedek is obviously not from the tribe of Levite, so why is he getting a tithe? And again we’re getting ready to learn it’s about respecting a foreign priest who is greater than the law.

In other words, we’re seeing a competition of 2 Priests – and 2 covenants and which one is greater!

If the law worked we wouldn’t need another way. The point is the law was weak and useless and only killed you.

Now HERE COME’s THE POINT of the last 11 verses:

[Hebrews 7:12] 12 For when the priesthood is changed, of necessity there takes place a change of law also.

Dead to the law. Free from the law. Not under the law. The point is there’s a new Priest in town that is deserving of way more respect than any Levite Priest and this new Priest forces a change of law.

[Hebrews 7:13-16] 13 For the one concerning whom these things are spoken belongs to another tribe, from which no one has officiated at the altar. 14 For it is evident that our Lord was descended from Judah, a tribe with reference to which Moses spoke nothing concerning priests. 15 And this is clearer still, if another priest arises according to the likeness of Melchizedek, 16 who has become such not on the basis of a law of  physical requirement, but according to the power of an indestructible life.

The physical requirement was to be from the tribe of Levi. By the Levite’s standards, Jesus broke the law. He was not a Levite. He’s greater than the law.

Do you see it? This was never about a command to tithe. It’s about Jesus as our new priest and how the law must change. It’s all about our new covenant, thorough faith. Now, for a few closing verses, you never hear legalists quoting.

[Hebrews 7:18] 18 For, on the one hand, there is a setting aside of a former commandment because of its weakness and uselessness  19 (for the Law made nothing perfect), and on the other hand there is a bringing in of a better hope, through which we draw near to God.  20 And inasmuch as it was not without an oath 21 (for they indeed became priests without an oath, but He with an oath through the One who said to Him, “The Lord has sworn And will not change His mind, ‘You are a priest forever’”);